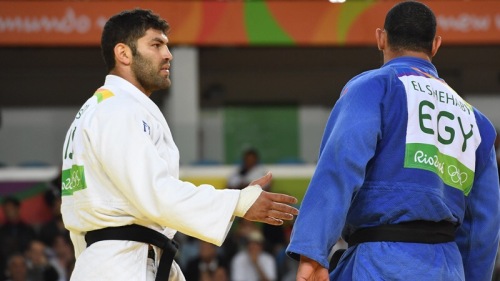 In the bad old days in South Africa, “petty apartheid” was the term used for the daily oppression and humiliation of blacks through separate public water fountains, bathrooms, buses, cafeterias and similar facilities. This strictly enforced separation was a sign of the black population being viewed as subhuman.

Since 1948, petty apartheid has also been a feature of the widespread Arab rejection of Israel as the nation state of the Jewish people. This practice is ongoing and is often taken for granted and ignored, as was the case of South Africa for many years.

For example, on Friday, just before the opening of the Rio Olympics, the bus provided by the International Olympic Committee picked up the 10-member Lebanese team and then went to pick up the Israeli team. The Lebanese blocked the Israelis from entering the bus, and according to media accounts team captain Salim al-Haj Nakoula “demanded that the door be closed on the Israeli team, but they ‘insisted on getting on.’” Haj Nakoula continued: “I then stood at the door of the bus to prevent the Israel team from entering and some of them tried to go in and pick a fight.”

The chronology was confirmed by the Israelis, who told the Olympic Committee officials that if the Lebanese could not stomach riding with Israelis, “They were welcome to take another bus.” After the brief standoff, however, and in order to avoid a violent confrontation, the Israeli team backed down and agreed to ride a different bus.

This is petty apartheid – practiced against Israel and Israelis on a daily basis, year in and year out, for 68 years, and still going strong. It is not a minor and childish “spat” as depicted in some media headlines (“Olympics spat as Lebanese stop Israelis joining them on bus,” Associated Press, The Washington Post) – but rather similar to the refusal to allow blacks in South Africa before 1994, or in the US before the civil rights movement, to sit with whites on buses or drink from the same water fountains.

Many Israelis have experienced this racism in one form or another.

I have been at academic conferences and diplomatic receptions around the world where Palestinian, Tunisian, Saudi and Iranian panelists, including government officials, have avoided shaking my hand or even acknowledging my standing as an Israeli Jew.

In cultural and sporting events, including previous Olympic Games, Arabs and Iranians have gone to great lengths to avoid being “contaminated” by Israelis, suddenly withdrawing from events, even when they would automatically lose as a result. In 2008, swimmers from Syria and the Islamic Republic of Iran took this route, and during the 2012 London Olympics, the Lebanese judo team went as far as refusing to practice in view of the Israelis, forcing organizers to erect a separation barrier (an Arab “apartheid wall”). In Rio, a Saudi judoka suddenly dropped out, apparently to avoid facing an Israeli.

The so-called international community, including the Olympic Committee, has, at most, reprimanded the boycotting teams and athletes, becoming a willing accomplice to anti-Israel apartheid.
In previous displays of this racism, no action was taken against the Syrian, Iranian and Lebanese teams and no penalties exacted to create a deterrent or express opposition.

In these frameworks, like the United Nations and the International Committee of the Red Cross, the 57 members of the Islamic bloc (formally known as the Organization of Islamic Cooperation), including the wealthy oil producers, control the agendas and have veto power over the officials.

Similarly, the self-appointed guardians of human rights, including NGO superpowers such as Amnesty International and Human Rights Watch, are silent when Israelis are the victims. Indeed, they are very active in promoting the apartheid inherent in the boycott movement, which is the current Western embodiment of the Arab League’s economic boycott of Israel. The anti-Israel campaigners in the democratic West who wrap themselves in the façade of human rights and opposition to racism are part and parcel of this apartheid.

In Lebanon, whose government and society is subject to intimidation by the Hezbollah terrorist organization, Minister of Youth and Sport Abdel Motaleb al-Hennawi praised Nakoula’s actions in Rio as “principled and patriotic.” Not surprisingly, Hezbollah noted that “the Israelis were sent away from the bus because normalization [with Israel] is not to be had in any form, and because the Lebanese identity [is that of] resistance. Be proud to be Lebanese.” As in the case of South Africa under the apartheid regime, contact with Israelis is treated as a form of impurity, and petty apartheid remains the norm.